Bungalowpark de Papillon is situated amongst the beautiful landscape of the province of Overijssel. Because of the varied and good facilities, this holiday park is pleasant for both families and the elderly.

Facilities at Bungalowpark de Papillon
There’s something for everyone at Bungalowpark De Papillon. Whether it’s relaxing at the recreational pond or going boating, the whole family are sure to have fun here. Fishing is also possible! There’s also plenty to do here for sports enthusiasts. There’s a beach volleyball and football field, as well as a tennis court. There’s even the chance to play a few games of boules to. Dogs are allowed in the bungalow park too!

Children’s facilities at Bungalowpark de Papillon
Children will never be bored at Bungalowpark De Papillon. Swimming is possible in the recreational pond, where the iceberg can be climbed, and sand castles can be built on the recreational beach. No matter the weather, you can always swim in the pool, the roof of which can be open and closed. In the water spray park, the children can play all day long, as it’s also close to the bouncy castle and the fish pond. In addition to all of this, there’s also an entertainment team and a theatre.

Restaurants at Bungalowpark de Papillon
You don't have to leave the park to eat either. There’s a supermarket, snack bar, bar and a restaurant, all on site. In the shop you can also get fresh rolls, as well as the morning newspaper in the morning alongside a fresh cup of coffee.

Surroundings of Bungalowpark de Papillon
Still feel like going out outside of the park? The bungalow park is located on the German border, which is a beautiful area known for being excellent for long walks and bike rides. There is also no lack of museums in the vicinity of Bungalowpark De Papillon either. For example, visit Cosmos Observatory (9km), where exhibition rooms, a large cinema, a beautiful planetarium and the largest telescope in the Netherlandsare all available to see. Here you can find out everything about the universe and the children can enjoy themselves in the Stargarten and playground. During special events, for example during a solar eclipse, the observatory is also open at night.

Payment is settled directly with the park, you will receive a full invoice with payment instructions from the park once a booking has been made. Please note: This invoice could arrive up to two weeks before your arrival date. The following payment conditions apply:

Deposit:
This park does not require a deposit.

Cancellation conditions according to Recron i

Pets on request
Pets are always on request. Please make this request clear when booking and the park will take it into consideration. If your request is approved, you will be charged €5,00 per pet per night. Maximum 2 pets per accommodation. 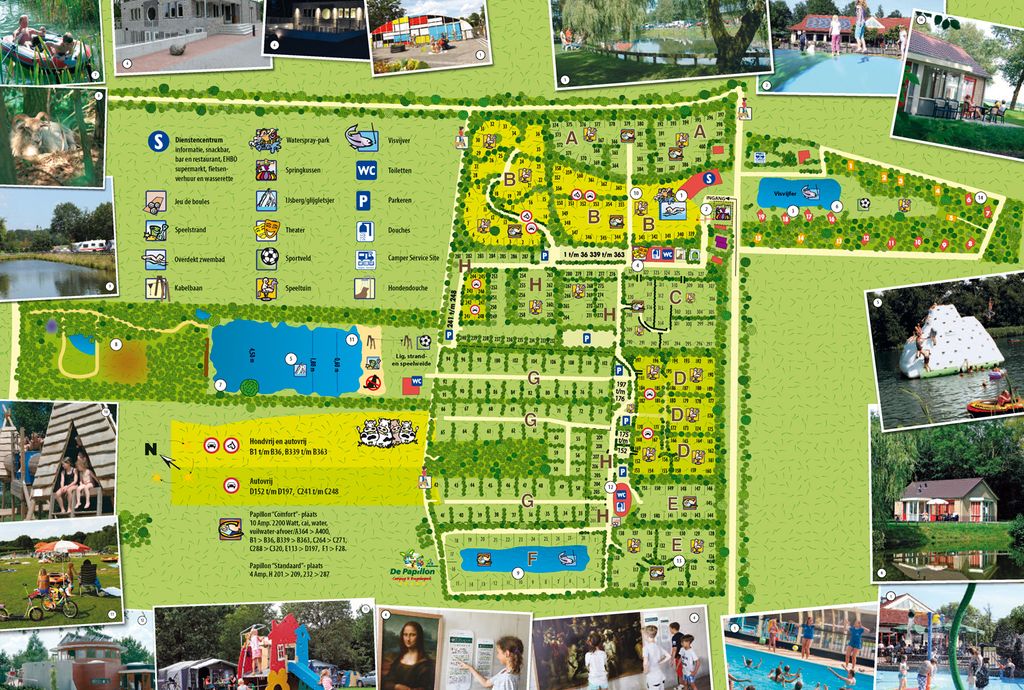 Open the park ground plan in a new window

No, that is not possible.

None of the accommodations have their own parking space.

Pets are allowed in some of the accommodations.

No, the park is non-smoking.

There are unfortunately no accommodations suitable for disabled people.

No, you can not specify a preference for the location of the room.

It is possible for babies to stay in all of the accommodations.

There are no accommodations that feature a fireplace

No, the park does not have a subtropical swimming paradise.

The following is available:
- Mini-market

Yes, there is wifi available in the park.

The park does not have spa facilities.

Have you found a holiday cottage, bungalow, or apartment that suits your needs? You can book with us either online or over the telephone!

Online
Would you prefer to book online? Then decide on the holiday park, choose the type of accommodation you want, specify the dates, and click on book. Just follow these simple steps and your booking will be complete in no time! Within half an hour of booking your accommodation (both over the phone and online) you will receive a conffirmation email, which is where you can also find your booking number.

Within half an hour of the booking, you will receive a confirmation email. If you've not received an email within half an hour, then please check your junk mail. If you still can't find your confirmation email, then we suggest getting in touch with our Service Desk on +31 23-3024901 (10 cents p/m) or fill out the contact form. In order for us to help you as quickly as possible, please have the following information to hand:

To change a booking (e.g. to another date), please contact our Service Desk on +31 23-3024901 (10 cents p/m). Changes are always made upon request and at the discretion of the holiday park. HolidayParkSpecials charges no fees, however, it may be that the park charges an additional fee (depending on the type of change). If the park does charge change fees, the costs will always be discussed with you.

Please note: in most cases, the holiday park will charge a cancellation fee, and the amount of this fee will depend on how late you cancel the booking. For this reason, we always recommend cancellation insurance. We also advise you to contact our Service Desk over the phone to discuss whether the booking can be moved to a different date.

It's always possible to pass on your special preferences and requests to the holiday park. For example, you may require disabled facilities, or you may prefer smoke/pet free accommodation. The possibilities vary between both holiday park and accommodation type. We therefore advise you to contact our Service Desk regarding your special preferences on +31 23-3024901 (10 cents p/m) or fill out the contact form. Our employees can then examine the possibilities to meet your individual needs.

Each holiday park has its own policies regarding pets. Some parks do not allow pets at all, and in other cases it varies according to the type of accommodation. In most cases, there is an additional fee for bringing a pet. The costs can be found on the information page of the relevant holiday park. If you're planning on bringing a pet with you, always make sure you make it clear when booking to avoid any problems (or additional costs) later on down the line. For more information about pet access to the holiday park of your choice, please contact our Service Desk on +31 23-3024901 (10 cents p/m) or fill out the contact form.