This price applies to a 4-person holiday house Comfort, with the first arrival possibility on 1 June, 2 Nights.

This price applies to a 3-person Mobile home/caravan, with the first arrival possibility on 20 June, 2 Nights.

This price applies to a 4-person Mobile home/caravan, with the first arrival possibility on 30 May, 2 Nights.

This price applies to a 5-person Mobile home/caravan, with the first arrival possibility on 20 June, 2 Nights.

Located in the heart of Holland in the beautiful Veluwe, you’ll find TopParken De Wielerbaan. This quiet and peaceful holiday park is surrounded by nature and perfect for a relaxing escape.

Facilities TopParken De Wieleerbaan
TopParken is situated in the richly-wooded Veluwe, a short distance from Holland’s most treasure National Park. Next to the park you’ll find a bicycle hub. If you want to explore the area, make the most of one of the many hiking and cycling routes in the vicinity. There is a heated and covered swimming pool at the park and a separate children’s pool, which is open from early April until late September. The park also offers a recreation centre, with ping pong table, multi-sports court and bowling area. For golf enthusiasts, there is an 18-hole golf course nearby.

Surroundings TopParken De Wieleerbaan
The park is located in a beautiful wooded area and boasts plenty of cycling and hiking routes. Make the most of the bicycle hub next to the park and explore the region! The city of Wageningen is just 2km away. Here, you can go shopping, enjoy one of the many restaurants or bars or visit Ouwehand Zoo (9km) or Burgers’ Zoo (18km).

Payment is settled directly with the park, you will receive a full invoice with payment instructions from the park once a booking has been made. Please note: This invoice could arrive up to two weeks before your arrival date. The following payment conditions apply:

Cancellation conditions according to Recron i

The indicated prices include the cost of…

Preferences
For most preferences/requests, this park applies a surcharge of €25.
Lay-out accommodations
The lay-out and facilities of the accommodations may vary per accommodation.
Opening times facilities
During the winter months the swimming pool is closed. "De Kantine" has restricted opening times.
Pets
Pets are always on request. Please make your request clear when booking and the park will take it into consideration.
Companies
The holiday park may only be used for recreational purposes. Companies can only stay on request at the holiday park.
Firework ban
On this park fireworks are not prohibited. However noise disturbance in the area cannot be avoided. 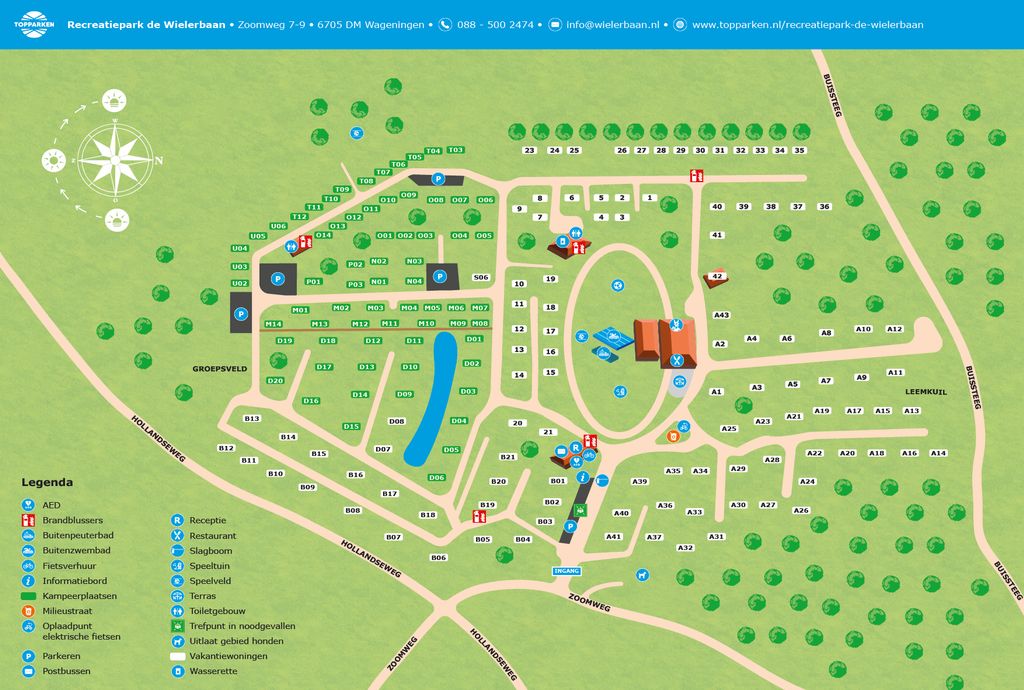 Open the park ground plan in a new window

Het huisje is helemaal in orde.

This review has no comments.

No, that is not possible.

No, the accommodation is not suitable for disabled people.

Some of the accommodations have their own parking space.

Pets are allowed in some of the accommodations.

No, the park is non-smoking.

There are unfortunately no accommodations suitable for disabled people.

No, you can not specify a preference for the location of the room.

It is possible for babies to stay in all of the accommodations.

There are no accommodations that feature a fireplace

No, the park does not have a subtropical swimming paradise.

There is no supermarket.

The following is available:
- Playground/playing equipment

Yes, there is wifi available in the park.

The park does not have spa facilities.

It's always possible to pass on your special preferences and requests to the holiday park. For example, you may require disabled facilities, or you may prefer smoke/pet free accommodation. The possibilities vary between both holiday park and accommodation type. We therefore advise you to contact our Service Desk regarding your special preferences on +31 23-3024901 (10 cents p/m) or fill out the contact form. Our employees can then examine the possibilities to meet your individual needs.

Have you found a holiday cottage, bungalow, or apartment that suits your needs? You can book with us online.

Online
Decide on the holiday park, choose the type of accommodation you want, specify the dates, and click on book. Just follow these simple steps and your booking will be complete in no time! Within half an hour of booking your accommodation (both over the phone and online) you will receive a conffirmation email, which is where you can also find your booking number.

Within half an hour of the booking, you will receive a confirmation email. If you've not received an email within half an hour, then please check your junk mail. If you still can't find your confirmation email, then we suggest getting in touch with our Service Desk on +31 23-3024901 (10 cents p/m) or fill out the contact form. In order for us to help you as quickly as possible, please have the following information to hand:

To change a booking (e.g. to another date), please contact our Service Desk on +31 23-3024901 (10 cents p/m). Changes are always made upon request and at the discretion of the holiday park. HolidayParkSpecials charges no fees, however, it may be that the park charges an additional fee (depending on the type of change). If the park does charge change fees, the costs will always be discussed with you.

Please note: in most cases, the holiday park will charge a cancellation fee, and the amount of this fee will depend on how late you cancel the booking. For this reason, we always recommend cancellation insurance. We also advise you to contact our Service Desk over the phone to discuss whether the booking can be moved to a different date.

Each holiday park has its own policies regarding pets. Some parks do not allow pets at all, and in other cases it varies according to the type of accommodation. In most cases, there is an additional fee for bringing a pet. The costs can be found on the information page of the relevant holiday park. If you're planning on bringing a pet with you, always make sure you make it clear when booking to avoid any problems (or additional costs) later on down the line. For more information about pet access to the holiday park of your choice, please contact our Service Desk on +31 23-3024901 (10 cents p/m) or fill out the contact form.